Allen & Heath has signaled an increased focus on installed sound by deepening the integration of its dLive digital mixing systems into multi-purpose venues.

A raft of new releases, control options and expanders adds to the dLive ecosystem to create a distributed, integrated, scalable and accessible solution, handling every aspect of a venue’s audio world from simple boardroom tasks to a full scale live show. 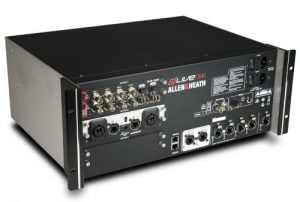 A new dLive MixRack targeted at distributed audio scenarios, the DM0, has been added to the family. DM0 is a 4U mix engine, housing Allen & Heath’s XCVI FPGA Core and providing enough processing power for 128 channels and 64 buses at 96kHz with a latency of just <0.7ms, in keeping with the existing dLive MixRacks. Interfacing to audio networks for access to hundreds of sources and destinations is provided by DM0’s three 128ch I/O ports, accepting cards for all major audio networking protocols, including Dante and AES67.

Other new products include a new DX Link I/O card and DX Hub half-rack unit, which now enable a dLive system to connect up to 48 audio IO devices, located up to 100m apart to meet the needs of the largest venues.

A new wall mount expander, the 16 in / 4 out DX164-W, joins the recently released DX168 stage box and the modular DX32 in the DX expander range. Integration with third party equipment has also been enhanced with the unveiling of a new GPIO unit, allowing dLive to control lighting, curtains and more.

Remote control options have been extended with the introduction of the programmable IP1 wall plate remote control, giving non-technical users control over functions such as music source selection, level control, or preset recall. Up to 96 IP1, IP6 and IP8 remote controllers can now be added to a dLive system via standard TCP/IP networks, in addition to console style mixing surfaces, tablet and laptop control, offering a multi-user, multi-point control architecture over wired or wireless networks.

What we’re doing with dLive is bringing together the best aspects of audio management systems and live mixing consoles to create a 360 degree solution for today’s multi-purpose facilities. If you look at environments like schools and colleges, houses of worship or arts centres, they need to handle everything from background music and meetings right through to large scale live performances: until now there really hasn’t been one system that can excel in all situations,” says Nic Beretta, Allen & Heath’s head of Product Marketing.

With this extension of dLive and upcoming software features focused on installation, we’re allowing our customers to create incredibly powerful systems, and yet make these accessible for all levels of users, from the fitness instructor to the AV professional.”

This website uses cookies to improve your experience while you navigate through the website. Out of these, the cookies that are categorized as necessary are stored on your browser as they are essential for the working of basic functionalities of the website. We also use third-party cookies that help us analyze and understand how you use this website. These cookies will be stored in your browser only with your consent. You also have the option to opt-out of these cookies. But opting out of some of these cookies may affect your browsing experience.
Necessary Altijd ingeschakeld
Necessary cookies are absolutely essential for the website to function properly. This category only includes cookies that ensures basic functionalities and security features of the website. These cookies do not store any personal information.
Non-necessary
Any cookies that may not be particularly necessary for the website to function and is used specifically to collect user personal data via analytics, ads, other embedded contents are termed as non-necessary cookies. It is mandatory to procure user consent prior to running these cookies on your website.
OPSLAAN & ACCEPTEREN
Soulwax on tour with dLiveAllen & Heath, Case Study
L-Acoustics Syva – Colinear SourceL-Acoustics, New